A whole new world of opportunity has opened up for LGBT immigrants after yesterday’s landmark U.S. Supreme Court decision overturning the Defense of Marriage Act (DOMA).  This unprecedented ruling will give immigrants, and their families, new options. 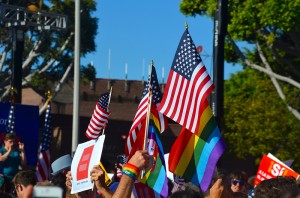 Yesterday, the Supreme Court ruled that the 17 year-old Defense of Marriage Act, commonly known as DOMA, is unconstitutional, and struck it down.  As a result, the federal government must now recognize all marriages determined to be valid at the state level, effective immediately.  This extends immigration benefits (including family-based petitions and visas) to LGBT families, because immigration is governed by federal law.

Before yesterday, 12 U.S. states and the District of Columbia recognized same-sex marriage, and over 30 foreign countries provided immigration benefits for same-sex couples.  However, in the U.S., DOMA prevented bi-national same-sex spouses from receiving any federal benefits.  The result was that many same-sex couples had to choose between staying together by living outside of the United States, be forced to split apart, or reside in the U.S. illegally and risk jail time or deportation.

However, as a result of yesterday’s historic Supreme Court ruling, couples who have legally married in states and countries that have legalized same-sex marriage can now submit family-based petitions for same-sex spouses.  That list now includes California, after another Supreme Court ruling announced yesterday declined to overturn a Federal Trial Court decision overturning Proposition 8, the gay marriage ban in that state.  Now, following these two landmark rulings, those who are engaged or married to same-sex partners overseas can immediately apply for a fiancé or marriage visa to bring their significant others into the United States.  Those who have foreign partners inside the U.S. may also be eligible to start their process for legalization right away.

The effect of these rulings are expected to be felt immediately, says Isabel Cueva, an immigration attorney in Orange County, California, whose law firm services clients nationwide.  “Before today, same-sex couples had no immigration options or benefits the way other married couples did. It was always difficult for me to turn people away, telling them they weren’t eligible because of who they loved.  I am looking forward to finally being able to help unite families in a way that has not been allowed before.” Ms. Cueva advises that those who are eligible for immigration benefits should begin their application process as soon as possible. “If it were me, I would want to be one of the first in line to submit my petition. How exciting it would be to receive some of the very first same-sex immigration approvals in U.S. history.”

The immigration benefits will go even further than family-based immigration petitions. Many foreign workers who bring their education and talents to the United States will now also be able to bring their same-sex partners. Ms. Cueva explains that many foreign same-sex couples have previously disregarded the option to come to the U.S., bringing their expertise, talents, and investments, because their spouses were not allowed to accompany them. “This change will help make the United States a more desirable place for gay and lesbian foreign couples to obtain an education, seek work opportunities, and investment opportunities.”

Isabel Cueva is a licensed U.S. Immigration Attorney and Associate at The Law Firm of Higbee & Associates, a national law firm with headquarters in Santa Ana, CA.  Same-sex couples worldwide who are looking for immigration assistance are encouraged to call Ms. Cueva.  She can be reached at 714-617-8395, or www.higbeeassociates.com.