Attorney Mathew Higbee of Higbee & Associates gave a presentation at an event for veterans at The California Endowment Conference Center in Los Angeles on the 27th of January. The daylong event, entitled “The Fundamentals of Providing Legal Services to Veterans and Military Members,”  was sponsored by the Veterans Legal Institute and the University of Southern California (USC). 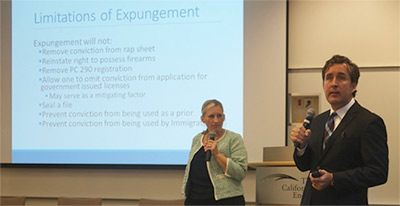 Higbee, along with co-presenter Professor Brittany Stringfellow, Director of Pepperdine Legal Aid Clinic, spoke before a distinguished group of social workers and attorneys who serve the veteran community.  The two presented a comprehensive overview of the expungement process, with a special emphasis on benefit and provisions that are available to veterans whose crime is a result of service related trauma.

According to a study by Eric B. Elbogen, Ph.D., ABPP (Forensic) UNC-Chapel Hill School of Medicine, “risk of incarceration is ranked as one of the most significant problems for Iraq and Afghanistan War Veterans.” In an abstract published in the US National Library of Medicine National Institutes of Health, Elbogen attributes the increased risk of incarceration to the fact that “many Iraq and Afghanistan War Veterans return home diagnosed with posttraumatic stress disorder (PTSD), traumatic brain injury (TBI), or substance abuse,” and “report very frequent symptoms of anger and irritability [and thus] may be at risk of engaging in criminal behavior.”

According to the United States Department of Justice (DOJ) Bureau of Justice Statistics, veterans represent 10% of the inmate population, which is a significant decrease from 1986 – when the percentage of inmates was double what it is now. While veteran incarceration is on the decline, it is still an issue. Conferences, seminars, and programs that address military issues such as reentry is a step towards progress, creating a safer and more fulfilling future for veterans and military members.

How Expungement May Help

The expungement process affords individuals with a criminal record the opportunity to divorce themselves from being affiliated with a life of crime.  California recently enacted law (Penal Code 1170) that enables veterans to expungement and record sealing if their criminal record is a result of service related trauma.